An art exhibition that feels like a dream comeback

Robert James February 12, 2022 Mountain Clothes Comments Off on An art exhibition that feels like a dream comeback 38 Views

For many people around the world, a childhood home is something lost forever. For people fleeing war, natural disasters and political discord, the instability of their continuing present can overcome aspirations to the elusive past. Even speaking for myself — coming not from the spectacle of public trauma, but from the personal sadness of a broken family and the early loss of parents, combined with the vagaries of a migratory life — some things just don’t exist. simply more: childhood homes, small trinkets and eclectic objects precious to memory. Sometimes they haunt my life as a writer, pressing forward like small but powerful dreams.

Ruchira Gupta, who can return to her childhood home, Gola, in Forbesganj – located in the foothills of Bihar, fourteen kilometers from Nepal – is turning this great opportunity into a very special series of paintings in an exhibition, “My Forbesganj Garden “, in the Virtual Viewing Room Art Gallery, curated by Prabhakar Kamble. It is a striking assemblage of colors, sometimes evoking the manner of Henri Matisse, which gives this tropical house in the foothills of the mountains an evocative narrative life. The use of color and eclectic lines is beautiful and admirable. It prioritizes the inner life of humans and other life forms in nature beyond the limits of physical verisimilitude. Prabhakar Kamble touches the heart of these paintings when he says, “Ruchira’s paintings have no prejudice – a hummingbird is bigger than a tree. Seamless continuity between different life forms and even inanimate objects defines these paintings, creating greater verisimilitude to the subject, this magical place. It’s art, as Kamble says, that “recognizes no hierarchy between bird, butterfly, human, or house.”

A woman hanging out her clothes | Artwork by Ruchira Gupta

Ruchira is a renowned journalist and activist, doing vital work with communities of vulnerable women. Her NGO, Apne Aap, has a striking history of vital work against intergenerational prostitution in red-light districts, particularly in Kolkata’s Sonagachhi. She was also a leading activist in the global #MeToo movement. The reality and meaning of work, especially that of women, is intertwined with the evocation of home, nature and community in these paintings. “Every morning,” begins the story of the very first painting, of a woman in a red sari standing in a flowery courtyard, holding a broom: “Sarita comes to sweep the leaves in our garden. His grandmother had migrated with my family from the famines of Rajasthan to the wetlands of Bihar over a century ago. This is followed by an imaginative evocation of the “cast iron pump” under the mango tree, the only source of drinking water for the family, Ruchira’s mother having no faith in bottled water transported over great distances. The wrought iron gates, always open to “squirrels, snails, birds and even rats and mongooses” so they can feel a sense of continuity with the property, are painted discreetly, almost part twigs and foliage. 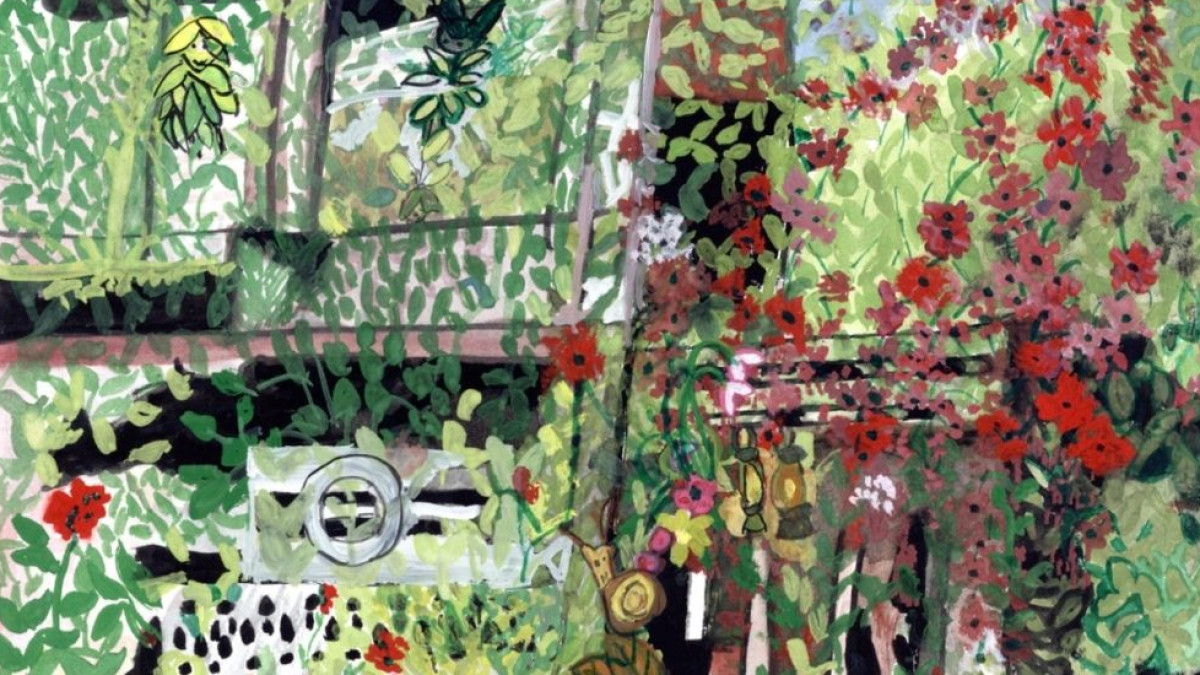 The beauty of a childhood home is that it contains items, trinkets, and possessions of great significance in the past that dwindle, wither, and disappear over time. One of the images depicted is Ruchira’s Class Eight sketchbook from Delhi Public School, which begins to tell the early story of the paintings that make up this exhibit. Finding these scraps of her past, she begins to paint, to give free rein to grief, rage and despair. “I decide to paint,” she writes, “the grief and anger I feel – at the death of friends from Covid; the murder and rape of an eight-year-old girl, Asifa; arrests and interrogations of my activist friends; of hunger and death caused by the unnecessarily harsh confinement of the women and girls I work with in sensitive areas.

The writing work and the gardening work continue side by side and are articulated in the series of paintings. Alongside the writing alcoves of Ruchira and her father, we have the professional life of Bahadur, the Nepalese caretaker, who “always snaps his fingers near the Tulsi plant before tearing off the leaves”; he says it is to “prepare the plant for the slight pain it will inflict”. Painting and writing have long coexisted in this setting, as Kamble reminds us in his curatorial introduction to the exhibition, through the tradition of Phanishwar Nath Renu, who depicted the people and landscapes of Forbesganj in the most more unforgettable. “Renu”, Kamble reminds us, “lived for long periods in Ruchira’s family home and often invited the artist and his childhood friends to ride in his ox cart to share stories of people entangled in the Kosi River – their traditions, their subjugation to feudalism, their poverty and their dignity. 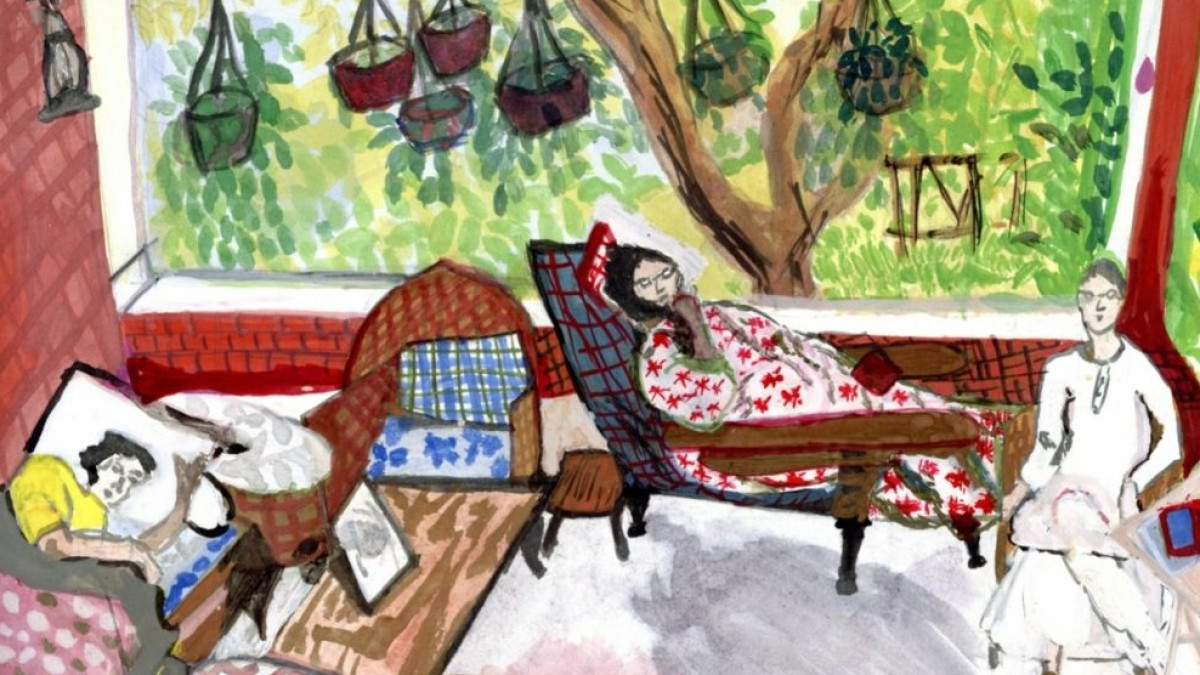 The veranda | Artwork by Ruchira Gupta

Ruchira’s paintings, with the little stories that accompany them, perpetuate this tradition of representing life, work, land and community, in harmonious continuity with each other. As Shanti goes up to the terrace to dry her clothes, Ruchira goes up with her and watches the station and the trains, near but distant signs of modernity in the middle, while her father and brother play carrom on the porch. Fruit vendors, street musicians and the paan shop form a noisy carnival that draws painstaking and intricate dabs of color from Ruchira’s brushwork, childishly eclectic and yet with deep, subtle design behind them. Beneath the banyan tree, the Hanuman idol offers faith and community, while the nearby Dalit settlement offers a different range of colors, both physical and metaphorical. As the painter’s gaze wanders from one interior space to another, the organic difference in these communities – between a man reading on a scroll and a community of listeners, and Ruchira’s family eating in beautiful steel thalis stainless steel, with her grandmother’s name engraved on it – shapes a narrative of dispersed and plural aesthetics that offer an invisible and organic unity to this small community of Forbesganj, bringing together animals, birds, humans, homes, objects, colors and sinuous lines of pure visual poetry. Even for those of us who have never been to this house, this exhibit feels like a dream comeback.


(Saikat Majumdar’s most recent novel is The Middle Finger. He tweets at @_saikatmajumdar. Opinions expressed in this article are personal and do not necessarily reflect the views of Outlook Magazine)