Robert James August 6, 2022 Mountain Clothes Comments Off on Listen to my body – The Trek 10 Views

The morning dawned overcast and slightly chilly. Luckily it didn’t rain overnight so the trail was only muddy in spots. Did 2-3 miles with Serendipity then continued solo up Stratton Mountain Incline. It reminded me of the Pacific Northwest with beautiful pines, moss and ferns. I climbed the fire tower to the top of the mountain.

I intended to descend, but accidentally took the ridge trail, not realizing it until I spotted the ski gondola through the trees. It added an extra 1.6 miles to the day which was annoying because on the way down I started to feel pain in the medial area of ​​my right ankle. I had noticed it during the last 4-5 miles of yesterday’s hike and was hoping it would heal in my sleep.

It was 14 miles long until VT 11/30, although I did the last four with All The Way and the talks helped the time go by faster. On the highway, I shuttled him, Sonic, and Dinglebeary to Manchester, VT. We ate at a busy burger joint and then restocked at Price Chopper. Jeff from Green Mountain House had dropped us off earlier and returned to take us to his hostel. Serendipity greeted us, clean in her ready clothes.

After a tour and the start of a combined laundry load, we sat down at the dining table to eat pints of Ben & Jerry’s ice cream. The first was only $1. I ate half then went to take a shower. Sonic, Serendipity and I shared a room with a bunk bed and a single bed. I gladly claimed the top bunk. We joked and laughed as we packed up our resupply food.

Yesterday I decided my ankle needed a rest or it could get worse. As the others had planned to stop at Rutland, I had five days of food resupply so I could move on to my next box and catch up with them. Serendipity surprised me by offering nero with me and I happily accepted.

All The Way, Dinglebeary and Sonic were scheduled for the 8:30 shuttle, so the five of us had breakfast together. The hostel had free eggs, coffee, cereal, and various foods left by other hikers. We had to get out of our room at 9am, but Serendipity and I were able to hang in the cozy common area. I had fun talking to a hiker named Four Eyes who had hiked the Arizona trail and was a Shenandoah Ridgerunner.

It was a cold day. Serendipity and I blogged, wrote postcards, and ate snacks. I also dried some gear and cleaned a trekking pole. There was a fantastic bear-shaped footstool in the living room that I used to elevate my feet slightly. It was a great hostel that I highly recommend.

Mid afternoon we were brought back to the trail. My ankle started hurting from the first mile but the pain had moved to the back of my ankle. Also, it decreased as we climbed. Serendipity said the change was a good sign. We traveled three miles to camp at the top of Bromley Mountain. The summit had a heated hut and a ski lift. 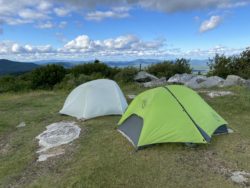 We had dinner in the cabin chatting with a 17 year old hiker named Dam who hikes the Long Trail. Money Stache arrived as we were finishing dinner. He and I taught Serendipity how to play Pokemon Go. It was getting cold as dusk approached, so Serendipity and I decided we might need more warm items for the White Mountains. . We ended the day watching a colorful sunset. 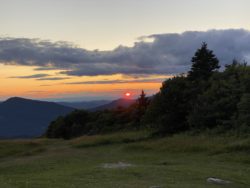 I was hoping for a beautiful sunrise to accompany last night’s splendor, but woke up to a fog shrouded summit. By the time I took down my tent, the fog had rolled in below the summit, leaving some distant peaks resembling islands in a white sea. I rushed to leave because I had less than eight ounces of water to drink.

A few miles later, I was about to filter out a large puddle when French Fry shouted that she had found a cache of water. I drank water and had a liter to carry. When I reached Peru Peak Hut, Serendipity was drying her tent on the tent platform. I did the same because mine got wet with condensation overnight. In the meantime, we joined French Fry at the hut’s picnic table.

At the junction of the Lost Pond shelter, Serendipity and I checked in and had a snack. My right ankle bothered me a bit and it lacked energy. We decided to do a 17 mile day trip and camp near the shelter at Little Rock Pond, five miles ahead of us. 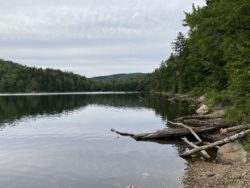 By the time I arrived my ankle was hurting more and I was really tired. Still, I brought my dinner to the lake-sized pond. While I was eating, I observed brown newts in the water. They floated with outstretched limbs or brought their legs together and spun propelled by their tails. It was so peaceful at the pond. I looked out at the calm water and the pine-forested shore, grateful for the reminder of why I’m here…. to be immersed in nature. I was in my sleeping bag at 8:20 a.m. and fell asleep soon after.

I woke up from an amazing night’s sleep to find I had slept in until 6:30. Serendipity was already packed and went to lunch by the lake. Once on the trail I did a brief hike with a guy named Spidy. It started on May 13. I was impressed with his pace, even though he had a small bag weighing only 19 pounds, including four days of food and water. If I hope to do the PCT, I still have to lose weight.

I caught up with Serendipity. Shortly after, we stumbled upon trail magic on the road before Bear Mountain. Our benefactor was a man named Spineless Cougar. He said he always does track magic on weekdays, which is less common. I was grateful for the perfectly ripe and juicy slices of watermelon.

In the middle of the afternoon, we crossed a pretty suspension bridge over a river gorge. Serendipity was craving some juice and asked if I could take her to Gouchberg Farms Market & Deli. I was up for the adventure! She had us driven by a nice lady. We met French Fry there and the three of us sat at a picnic table to eat. I got Serendipity and myself back on track from a guy who just left the store. 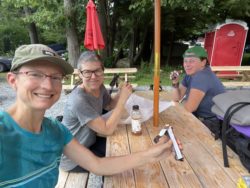 A few miles from our destination, we came across the “Katahdin 500 miles” sign. Wow, that seems so close! It was a 20 mile day to camp near Governor Clement’s shelter. The last mile really hurt my ankle. I think I need to keep my mileage under 20 until my ankle has more time to heal.

This website contains affiliate links, which means The Trek may receive a percentage of any product or service you purchase using the links in articles or advertisements. The buyer pays the same price as they otherwise would, and your purchase helps support The Trek’s ongoing goal of providing you with quality hiking advice and information. Thanks for your help!

To learn more, please visit the About This Site page.