YSS Department Beginning of 15 days of ski training in Gulmarg

On November 23, 2020, skier and filmmaker Nikolai Schirmer took a day off to travel to familiar terrain near his home in Tromsø, Norway, which was also the first region he visited in adolescence. While the main area consists of gentle slopes, Schirmer and his friend Eivind decided to check out one of the falls on a steeper west face. With only a little fresh snow on a solid footing and no recent avalanche events in the area, Schirmer expected them to only deal with the sluff management. But he was surprised when this sluff turned into a large avalanche, which was documented in a video on Schirmer’s YouTube channel. Below, Schirmer tells the story in his own words. —Betsy Manero

We checked for snow on the face we’re falling in, and nothing funky was going on. These two skiers had fallen before our arrival. It was a little overcast and foggy that day, so we just saw their tracks come down, and they dug a pit in their face. So that was what was going through our heads at the top of the line. When I arrived, I didn’t think for a second that I could trigger an avalanche. I skied in the chute and it was really good snow.

Then I hit a rock after the fall. My ski falls and I stop right in the middle of my face. You can hear on the GoPro clip that I’m laughing a bit.

And then all this snow hits me in the back, and my first thought is, “Oh, it’s my dirt hitting me.” I kind of saw it coming, and then it’s more and more snow, and it’s really violent. I had never been in a real avalanche before, like rolling down the mountain.

I try to swim in the masses, and when the snow hits me, it pushes me head first. I try to keep swimming in the snow to lift my head and feet so if I hit something it won’t be head first. But I hit this and that, and at one point, I cross a cliff, up in the air, and then I keep tumbling down. There is quite a bit of snow, but it is not bottomless. Every time I hit rock bottom I try to self-stop. I don’t know how many times I do this. But before the place where it flattens out and all the snow rests, I’m able to self-stop. The snow disappears under me. I think I was dragged 200 or 300 meters.

I’m fine, but a little shaken up. I hurt my thigh and hip a bit. But other than that, I was fine. The ski that I lost on a rock had flown off to the side, and I look up and it’s still there. The other ski that was on my foot is gone. The binding is out, and I don’t know where this ski is.

Eivind goes down after me and picks up the ski. He said there wasn’t really a big crown anywhere. There were a few small crowns on the side of the chute at the top. We talked about it, like what could it be? The snow a little lower on the face got a little warmer and wetter, so we didn’t have a full wet slide but a point release, basically. It was deployed from the start, where it was quite narrow, but at the bottom it was between 50 and 100 meters wide.

What I want people to really take into account is the fact that no matter how safe you are on the snow, and no matter how many lessons you take or how much knowledge you gain, if you go on avalanche terrain, there is no way to do it. completely eliminate the risk of avalanches. I’m not going to say that I did everything right that day. I certainly didn’t. I feel like there’s so much focus on everything you need to do right, and that’s very important, of course. You have to acquire all the skills and acquire all the knowledge. But I don’t think we talk enough about the fact that even with having all the skills and knowledge there is still a risk and there is no getting around it.

You really have to ask yourself if you are ready to accept this. Accept the consequences of having a broken leg in an avalanche or dying. It’s real there.

This article originally appeared in issue 139. Find out more by getting your copy at BackcountryMagazine.com/139 or subscribe. 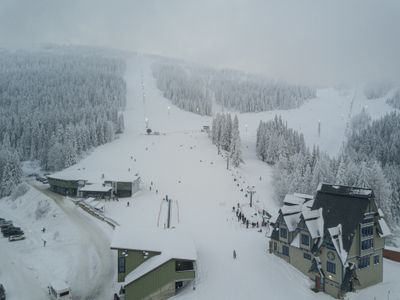