A multidisciplinary creative with a background in visual communication and the arts, born and raised in Buenos Aires.

With over 18 years of experience, award-winning designer Adriano Lombardi’s career has taken him to WPP agencies in Argentina, Peru, Colombia and, most recently, Mexico, where he serves as Executive Director of creation at VMLY&R COMMERCE Mexico.

Adriano has created industry-defining work for global clients including Coca-Cola, Volkswagen, Unilever, Mondeléz, Campari, Mazda, Chevrolet, Puma, Anheuser-Busch InBev, Belcorp and Diageo, among others. Her experience across South America provides her with local and regional multicultural experience and knowledge.

He has also served as a juror at international award shows and now mentors the next generation of creatives as a university lecturer.

WHAT YOU HAVE DONE

Adriano > We launched a new payment solution that turns football shirts into digital wallets. To enjoy a cold Corona beer in football stadiums without using cash, people simply had to connect with a vendor, who had the “Jersey Tap Logo”, and press the badge of their soccer jersey. Using a point-of-sale terminal, the salesperson placed his contactless device over the badge and instantly charged the beer to the customer’s account. To make it even more compelling, every beer in the stadium was sold at retail price (which is at least half the price of a normal beer in the stadium). The idea represents our Creative Commerce discipline at its best. An innovative payment solution – solving a cultural and social tension in Latin American stadiums – while creating a new business model and a great commercial game by Corona using the most precious asset a football fan can have – his team jersey – to boost both sales and brand love.

LBB> What was the initial brief or the problem defined by the client?

Adrian> Corona was seeing a marked reduction in the volume of beer sales in football stadiums. Although there were many theories as to why this was happening, ultimately what they needed most was an innovative response to fix the problem and turn the situation around.

LBB> And after some research, what did you discover to be the “real” problem (and what thought or research led you there)?

Adrian> The real problem is that football stadiums in Latin America are noisy, crowded and unfortunately unsafe. The math is pretty simple: crowded places mean pickpocketing, leaving football fans to take measures to protect their possessions. These measures amounted to fans not bringing mobile phones or wallets into stadiums, but only their most prized possession – their team shirt.

LBB> After breaking down the initial problem, what were your first steps?

Adrian> We researched different stadiums to better understand the behavior of football fans, their journey of buying alcohol, how much money they brought, how safe they felt, and more. What we realized almost immediately was the one thing everyone was bringing: their team jersey. It was the starting point for us to think about a new payment solution. 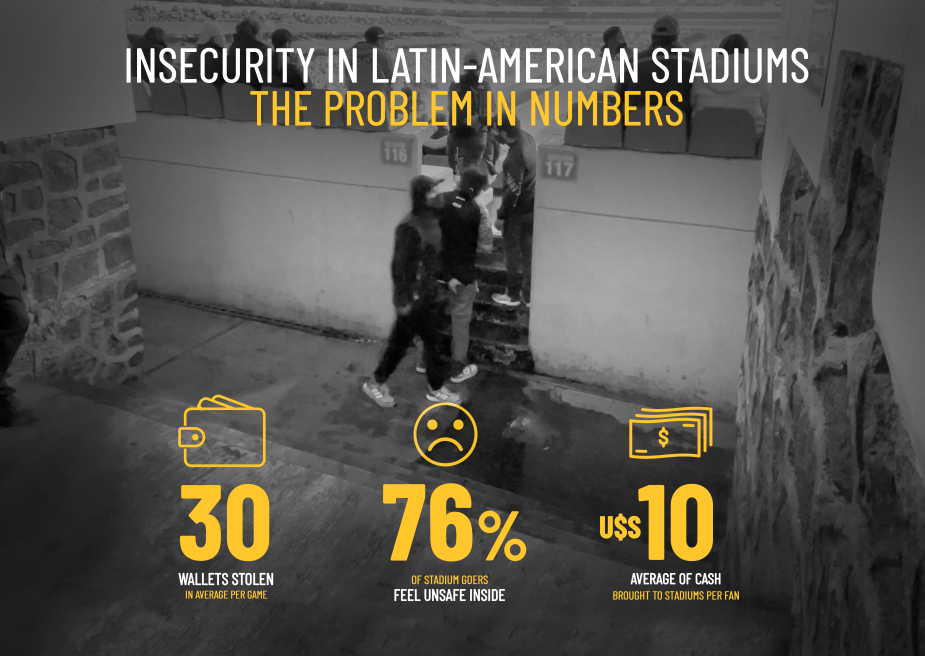 LBB> And how did you arrive at the form that the solution would take? What options or ideas did the ideation process initiate?

Adrian> We started thinking about a simple but clever way to add an NFC tag (similar to those used on contactless credit cards) to a jersey without melting the circuitry. It certainly wasn’t easy, but we managed to find the perfect temperature to stamp it on, then add a plastic cover to protect it from water (even though the label itself was waterproof, we wanted make sure it would hold up well to both weather and washing).

LBB> Was the problem relatively simple to solve or were there blockages or challenges? How did you crack it? Was it about having to sift through a multitude of ideas and “kill some darlings” or were the ideas quite hard to come by (and why)?

Adrian> While the first challenge was getting the label itself to stick, we also had to sync AB InBev’s e-commerce platform with users’ accounts and then link it to their football shirts. It took a lot of really hard work with both the physical store staff and the programming of the platform to accommodate this new feature.

LBB> Where did you look for inspiration?

Adrian> Inspiration is there all the time! In this case, seeing all the fans with their jerseys was all we needed to inspire us. After all, it’s the most valuable thing they bring with them to the stadiums!

LBB> Tell us about what you think are the interesting aspects of the design and prototyping process.

Adrian> Iteration is the magic word. Repeat the process over and over again to get it right. Being able to make mistakes was amazing – it’s a dynamic that motivates you to try even harder. The bigger the error, the greater the motivation to fix it. Many labels have been burned and thrown away (and when I say a lot, I mean a LOT!), but that never stopped us from trying again. 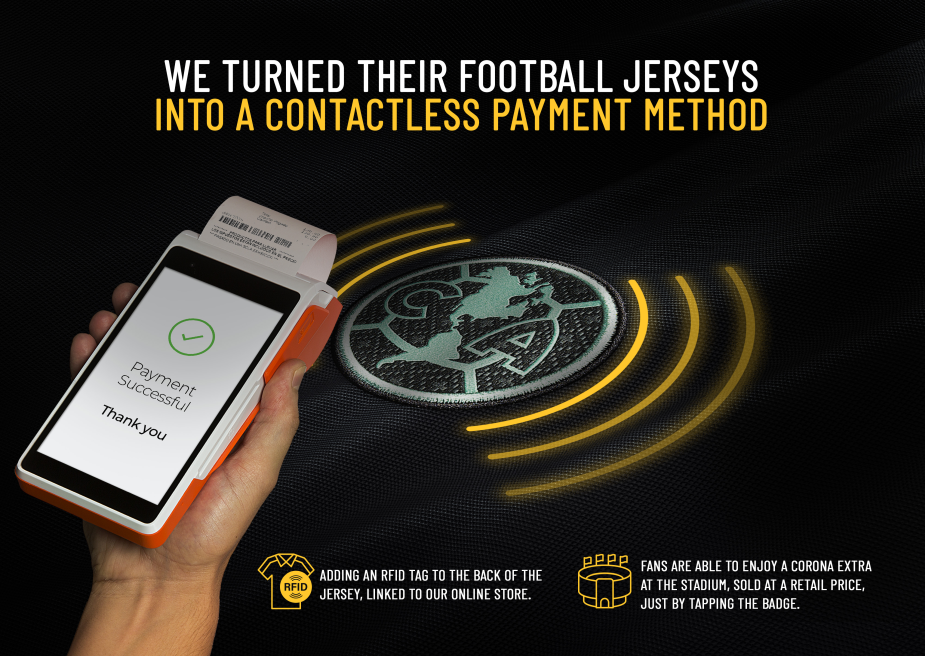 LBB> What have been the most interesting conversations or challenges that have emerged at this point? (could be technical, could be emotional, aesthetic…really, how gritty was that oyster!?)

Adrian> Although getting the labels to stick was a challenge, once we got over that, our first attempt at using them inside the stadium was definitely a highlight. We had everything in place – our point of sale terminals, the fans had their shirts. Everything was ready to go, until the stadium’s Wi-Fi started to slow down, causing transactions to fail. Meeting the challenge of continuous connectivity at the stadium was no easy task. As the brand negotiated improved internet connectivity as part of an overall stadium renovation plan, we opted to install exclusive, temporary networks for each match, allowing our devices to be online. It was set up so that only our POS could transact with the shirts and had to be uninstalled after every game. It was definitely a very painful time to get to the end result we needed, but we knew we had to make it work.

LBB> And what kind of talents/collaborators/specialties have you had to contact and work with at this stage, and what did they bring to the mix?

Adrian> There were so many – people working with the technology itself (they were working with point-of-sale terminals and contactless technology in Cancun resorts), programmers from our agency, the client themselves and a huge production team. They were a group of super talented people who wouldn’t take no for an answer.

LBB> Were there any new technologies or creative risks that you had to play with, design around and if so, how did you deal with that?

Adrian> Fortunately, we were able to develop the idea as planned.

LBB> How were tests and iterations taken into account in your approach to this project?

Adrian> A lot, to be honest. The project continues to iterate as it grows. Now we’re iterating with scalability, which is also an issue. But like I said earlier, it was essential for us to make the idea as great and bold as it is.

LBB> What were the spiciest issues, tweaks, and back and forths that emerged from your testing and learning?

Adrian> We really struggled with NFC tags. It was a continual fight to keep them from melting. Around the 46th attempt, we suddenly realized that the tag we were testing was intact, still attached to the back of the badge and working as we expected. You should have seen us celebrating, it was like we had won the World Cup!

LBB> Now that the project is live, how does the data and feedback help refine it?

Adrian> The amount of data we collect is monumental. We are now able to track the amount and types of beer our consumers consume, overall site sales and more. It’s amazing to be able to leverage this data and use it not only to perfect the customer journey, but also to help our partners at AB InBev understand how in-stadium sales work in real time.

LBB> Looking back on the whole project, what were the most personally interesting aspects for you?

Adrian> I’ve always known it takes hard work to make things happen, but with this campaign I’ve learned that it takes even harder work to bring innovative ideas to life. The Creative Commerce discipline is completely new and this project is the perfect example of inspirational conversion-driven creativity in the moment – it was an idea that touched people’s hearts, but also helped grow business . That’s really what Creative Commerce is all about, taking a unified look at the buying journey and ultimately arriving at the most creative, yet culturally relevant commerce experience for our customer. That’s what we did with Jersey Pay.

LBB> And what impact did this project have on your client’s business or on the initial problem you wanted to solve, anecdotal or data-based, depending on the nature of the project?

Adrian> The result was phenomenal. In the first week of the pilot launch, we saw:

Previous Why “Class Action Park” is a bit of a misnomer
Next What’s inside that purple barn on Route 23?